Posted by Robin Goodfellow at 02:23 No comments:

The references for my talk at the Society for Research in Higher Education conference in Newport - December 11th 2013...

(link to slides and text to follow - after I see how the talk went!)

Posted by Robin Goodfellow at 04:43 No comments:

Literacy in the Digital University won't lie down!

I thought I'd finished blogging about this topic but I just listened in to a webinar about 'messing with digital literacies' and took this screenshot during it, of Mary Hamilton in a room full of books, in a window full of icons, with a screenfull of bullet points. You can't see the chatbox full of text or hear the stream full of audio... Literacies in the digital age just won't lie down. 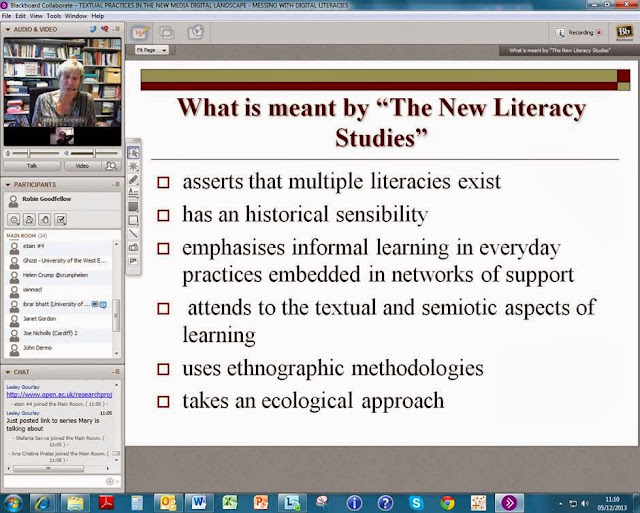 Literacy in the Digital University book hits the world's bookshelves!

Revisiting my much-neglected blog to proudly announce the publication of THE BOOK which is the final output from the Literacy in the Digital University seminar series and subsequent work. Information is available on the Routledge website. 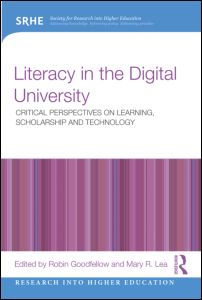 Introduction: Literacy, the Digital, and the University
Robin Goodfellow and Mary Lea

Chapter 5. The Literacies of ‘Digital Scholarship’ – Truth and Use values
Robin Goodfellow

Chapter 12. The digital university: A concept in need of definition
Chris Jones

Chapter 13. Control and the Classroom in the Digital University: the Effect of Course Management Systems on Pedagogy
Bronwyn T. Williams

Posted by Robin Goodfellow at 04:58 No comments:

Revisiting an earlier interest in openness

Working at the open University for 17 years inevitably colours one's perceptions of what openness is about. Here it has always had a significant political dimension.

As one who's 'office' is located in the Jennie Lee building (Labour Minister for Education 1967-69), and who occasionally has a drink in the cellar bar in the company of photos of Harold Wilson (Labour Prime Minister 1966-70) and Nye Bevan (Labour architect of the national health service 1948) I can't help being reminded of the roots of the concept in the ideals of social egalitarianism and the socialist politics of the post-war period.

I reflected on some of this in a chapter I wrote in 2007 about equal access and widening participation, for a book edited by Joe Lockard and Mark Pegram called 'Brave New Classrooms - Democratic Education and the Internet' (Peter Lang).

I wonder where our current concept of (technologically defined) openness fits into this ideological spectrum? The sight of Martin Bean and David Cameron both extolling open education in India the other week, the one because it will benefit the have-nots, the other because it will be good business for the haves, made me wonder if it can really be such a win-win proposition?

Back to blogging again after a bit of a lay-off, for the Open Education massive open online course that Martin Weller has set up in the Open University OpenLearn environment.

Not sure I care much for the 'massive' bit, but as I'm doing some writing about educational open-ness in general at the moment I thought it would be useful to get some inside experience of this version of it.

The course starts on March 16th and goes on for 7 weeks, which overlaps with my study leave in New Zealand, so I'll be interested to know if anyone else is doing it from there too!


This talk considers the processes and outcomes of an ESRC-funded seminar series, held between October 2009 and April 2011. 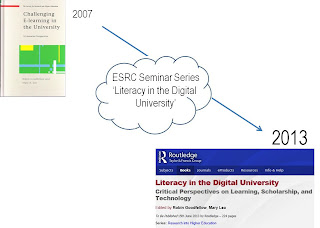 The series brought together researchers and practitioners involved in four research projects that were focused, in different ways, on literacy, tertiary education, and digital communication (LIDU 2010).

The seminars set out to develop an agenda for new research, drawing on the range of conceptual, methodological, pedagogical, and political approaches brought to the discussions by participants from the different projects. But bringing these disparate people and approaches together was one thing -- ensuring coherent outcomes was quite another! In this talk I will review some of the problems we ran into, and the lessons we learned, trying to find common ground amongst linguists, social theorists, and learning technologists, talking about texts, practices and technologies.

I will describe how we eventually overcame most of these problems, and identified three major themes around which to propose future literacy-oriented research: ‘digital scholarship’, ‘post-human pedagogies’, and ‘the borderless university’. These themes are further explicated in an edited book called ‘Literacy in the Digital University’ to be published by Routledge in 2013, which I will plug shamelessly during the talk.


Blog posts  in Literacy in the Digital University http://literacyinthedigitaluniversity.blogspot.co.uk/


If Literacy is social practice why do we need to talk about Texts? Thursday, 5 November 2009 http://literacyinthedigitaluniversity.blogspot.co.uk/2009/11/if-literacy-is-social-practice-why-do.html

'Literacies and Technologies' or 'Why I think we need to keep talking' Friday, 6 November 2009 http://literacyinthedigitaluniversity.blogspot.co.uk/2009/11/literacies-and-technologies-or-why-i.html


Summary of seminar themes - towards a research agenda for Literacy in the Digital University (long post!) Tuesday, 30 November 2010 http://literacyinthedigitaluniversity.blogspot.co.uk/2010/11/summary-of-seminar-themes-towards.html


Hemmi, A, Bayne, S and Land R (2009) The appropriation and repurposing of social technologies in higher education. Journal of Computer Assisted Learning, 25(1). pp. 19-30.


Posted by Robin Goodfellow at 04:54 No comments: