Personally, I thought this seminar was brilliant! Two days of high-quality presentations and stimulating discussion, interleaved with some excellent cakes.

[This will be a quick descriptive report, there is a lot of comment and reflection to be done over the next couple of weeks while we put audio clips and presentation slides up on the website.]

The strategy of having two quite different international guest speakers, one on each day, worked a treat. Eszter Hargittai began the proceedings with a 'reality check' on US college students online skills and activities. 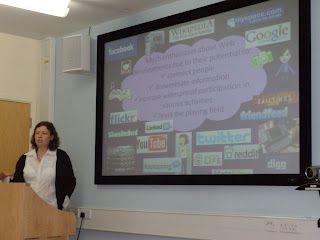 Eszter's presentation of her large-scale survey-based studies contained a number of nuggets of information that caused a frisson or two in the audience -- that male students are far more likely to overrate their skills levels than females, for example, or that males create and upload more content, but females spend more time changing their Facebook privacy settings. And most surprising, that only 18% of 2009's respondents were twitter users, or that 63% do NOT use their mobile phones to access the internet.

In contrast to Eszter's statistics, Carmen Lee's talk on the second day gave us what she called a 'discourse-centred online ethnography', looking at Hong Kong students' use of micro-blogging features in Facebook. 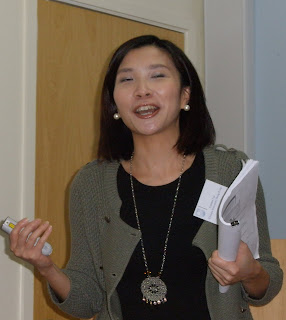 Many of us were particularly intrigued by Carmen's examples of student online texts which mixed English words with Chinese ideograms and phonetically-spelt Cantonese exclamations. The subsequent discussion raised the issue of anonymity (or otherwise) for informants in this kind of research, an issue relevant to the presentations of several other speakers.

In and around the presentations of these two international guests, the LIDU core seminar group fitted talks and workshops covering a wide range of topics, none of which could fail to engross anyone who has ever stopped to think about the actual literacy demands of engagement in online practices, from putting your homework up on Flickr to blogging your scholarly reputation.
Sian Bayne's meditation on distance education as a 'post-human' human-technology symbiosis was later illustrated by Jen Ross and herself with some impressive examples of their own MA students' virtual 'lifestreams' assembled from a variety of feeds over the course of their study. Lynn Coleman's and Sally Baker's joint discussion of the use of the digital as both object and artefact for research kept the focus firmly on methodology -- the theme of the seminar. Mary Lea gave an account of the pedagogical 'sandwich' in which unpacked and little-researched students' practices with technologies are the filling between layers of text-based task and assessment. Rhona Sharpe reported on research into learners experiences, demanding more reliable and usable methodologies to involve practitioners and students in data collection that captures and retains the learner's voice. David Barton, Mary Hamilton and Candice Satchwell, discussed and demonstrated Flickr as a learning environment, the possibilities inherent in collaborative research methodologies in which informants and researchers make collective decisions at all stages of the process, and the highly engaging online exchanges of children (and some of their parents) during a climate change project. Helen Beetham and Allison Littlejohn cajoled workshop participants into some meaningful reflexivity about aims and outcomes in digital literacy research, and I raised the spectre of the 'digital scholar' and the breaking down of the walls of the Academy!
In between all this we talked a blue streak, and I had the feeling that the whole topic was really beginning to open up, and to overcome some of the difficulties in communication between 'language' and 'technology' people, that we had found in previous seminars. This was confirmed by Carrie Jewett, who spent some of her preparation time as discussant, when she wasn't enthusiastically contributing to the discussion itself, compiling a 'wordle' out of the abstracts of the seminar talks. 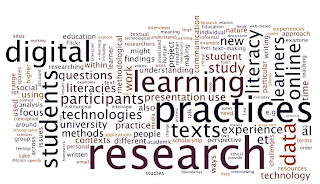 This demonstrated vividly how research had come to the fore, and the problem terms 'literacy' and 'technology' were being absorbed into shared notions of practice and learning in digital environments.
The discussion that followed Carey's plenary session will be the subject of a subsequent post all to itself. In the meantime, here is a caption competition: who is saying what to whom in this snapshot of Jenn, Sian and myself sharing a post-human moment? 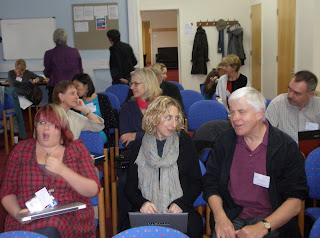 Posted by Robin Goodfellow at 09:35